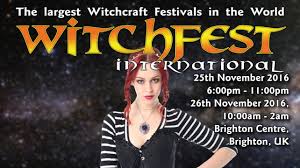 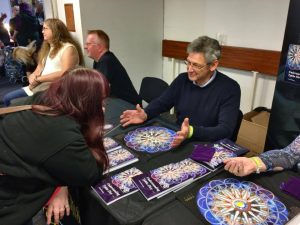 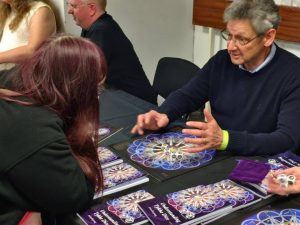 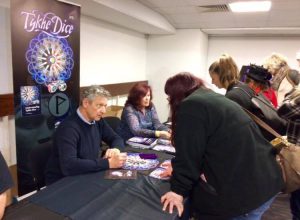 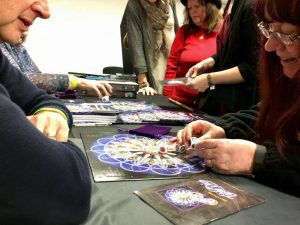 Our first workshop at Witchfest was amazing, once we had got used to the size of our meeting room, setup the tables and banner, the first of many curious people came in so nothing for it but to start straight away! Their interest was quite overwhelming with question coming thick and fast, allowing them to first feel the Tykhe Dice and look at the board, once things had settled down, they took their seats and we went through a little on the history of dice over the last 4500 years to get to Divination with Tykhe Dice and the three and a half years it has taken to present Tykhe here! Followed by an explanation of the symbols and board, the questions that followed covered the many aspects of Tykhe Dice from the reading of one symbol on one die, building to three symbols on three dice. A brief description of working with the Tykhe Board followed by mini readings with some twenty-five coming up for short readings, their question covering many aspects from relationships to house moving to business changes. Once things had settled back down a further question was raised regarding the Goddess Tykhe ‘who was she’ Her story and that of the hero Palemedes was given to a very appreciative audience. The book signing later in the afternoon was much the same with great interest shown in this new very old divination system, many thanks to Rie and Gary for the help and the kind words from Nick O’Conner (PF) and Cat Treadwell as we chatted before the before the book signing.
Do you need any more info?

visitor comment: Nick O’Connor, “Great workshop, learned a lot, as opposed to some of the more mainstream speakers who were more hogwash than Hogwarts!” 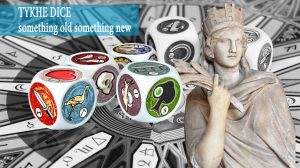 Tykhe Dice are both an entertaining and insightful vision of : Love, life and finances. The wisdom of 2500yrs in revealing personal futures are combined with the inner skills and desires to achieve them. The dice give a random cast of the elements of your life. Easy to use but infinite in possible meanings. Includes Runes, Elements, Planets, Zodiac in a new and empowering way.