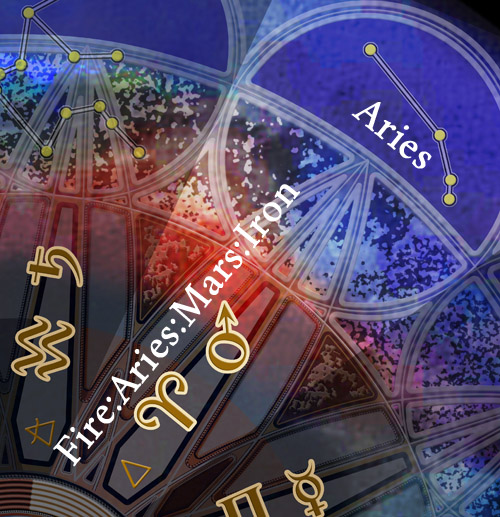 A really interesting way of discovering incredible  background information in your Tykhe readings, is by the use of basic knowledge regarding the elemental dignities.

To understand the idea of dignities in Tykhe Dice reading we need to establish certain rules for reading these interactions between Tykhe symbols.

You may be well aware that the whole idea originates in astrology where a planet may be seen as “dignified” in a particular location on a chart. For example the planet Mars is seen as “dignified” in Scorpio, making it potentially better or more influential in the chart than if it were to be in Cancer, where a proportion of Mars energy (nature) becomes cruel rather than empowering.

In Tykhe reading the dignities are based on the four elements, fire/earth/air and water to which each Tykhe symbol is assigned.

A Tykhe symbol is either Strong or Weak, well dignified, according to the Tykhe symbol next to it or on either side.

Tykhe symbols of the same nature on either side Strengthen it greatly, for good or ill according to their (energy) nature.

Tykhe symbols of the opposite nature on either side Weaken it greatly for either good or ill according to their (energy) nature.

Air is inimical to Earth

Fire is inimical to Water

Air is friendly to Water and Fire

Fire is friendly to Air and Earth

If a symbol falls between two other symbols that are mutually contrary, it is not much affected by either.

The Elements and Symbols

Now this may seem a little confusing, but there is some logic to the rules (honest) as they can be seen to link with a group of Tykhe symbols according to their assigned element.

In this way we can see that the Key corresponds to Air and the Snail corresponds to Earth, as Air and Earth do not get along with each other, being so opposite , they are “inimical”, therefore weaken the Tykhe symbol that falls between them.

On the other hand if we had the Cat fall between The Web and The Bat we would see that The Cat (Water) was “weakened” by “inimical” opposition of The Web (Air) and The Bat (Earth) on either side.

You can see this even before you look at reading the symbols themselves for the dignities as found in Astrology give us a background picture of forces acting upon the reading as we construct it in more detail.

A handy way of looking at this scenario in a workshop setting would be to take three people and a “hop up” or small pair of steps, the three people representing the three Tykhe Dice cast so each will represent a symbol.

Now the person representing the central symbols needs to stand on the hop up or climb a short way up the steps, with the remaining two people together with their symbols standing either side of the steps, they may be seen to support the person on the steps, or they may possibly be arguing and rocking the steps.

The central person (symbol) may be either a “good” symbol or a “bad” symbol, in terms of the overall reading. Therefore the impact of the two people (symbols) standing either side at the base supporting it may be a good thing or even cause some difficulties making it a bad thing.- this however could turn out to be a good thing overall.

So, whilst the central person  (symbol) is trying to do their job, be it break into your car or fix your plumbing te other two people (symbols) can affect how they go about the job.

A little more on Elements

Keeping the notion of the steps in your mind, as we take a closer look at who gets together and who just does not.

Fire and Water, or Air and earth are opposite, so do not get along with each other so would rock the steps.

Fire and Air get on famously with each other and will support the ladder, think of blowing a flame.

Water and earth, and Air and Water are “friendly” so can be seen as keeping busy chatting to each other at the base of the steps,allowing the central symbol freedom to get on with the task in hand.

When looking at the same Elements (such as fire and fire) they can be seen to get along and will “strengthen” or even accelerate or amplify the central symbol, this may turn out either for good or bad within the overall reading.

We could well wish the Knife to be amplified by two identical elements either side of it. Unless the question was relationship centred “will a separation happen quickly?” you will not be surprised to find the answer wold be positive. For good can become bad and bad turn to good very quickly.

As we start to read with dignities in mind, our readings become far more subtle in their expression, think of it as having an under lying story behind the leading characters in a drama, you will start to understand their motivations and possible actions far better, for you get to know were they are coming from, and most likely where they want to go.

It’s remembering the the whole reading forms a story, for if we read each symbol as a separate character, we may just miss something because we are seeing it in isolation, not allowing for the possible influence of the other symbols in it’s life possibly leading to a very bland generic reading.

If we were to take a look at the Beetle for example, it generally has a reasonably “positive” feel about the symbol in most questions, where it could be read as telling us to “Save” or “Hold onto” that which we have gained, a symbol in which we would most likely advise not to link up with someone else in the hope of expanding or putting at risk your resources, to avoid time and energy on new projects. It is a holding symbol.

If we take the Beetle as Earth, and see it fall between two fire symbols (say the Sun and Fruit Tree) It may tell us that we are resisting a lot of fire energy to burn through our cash. A strong indication that is this underlying story showed a person often spending rapidly (the Sun) and ending up hoarding (the Fruit Tree), the more they moved (the Sun) the harder it got )the Fruit Tree). So the Beetle would be unable tp maintain this given the underlying story. When discussing our reading we may wish to show that the “Earthing” of what we already possess will prove to be a lot better, and more pleasurable, enduring and realistic, than the constant demands of fire, for it requires constant re-fuelling and they will only get burnt.

This shows we can get a far deeper and more empowering reading, just for considering the three elements at work on a pair of steps.