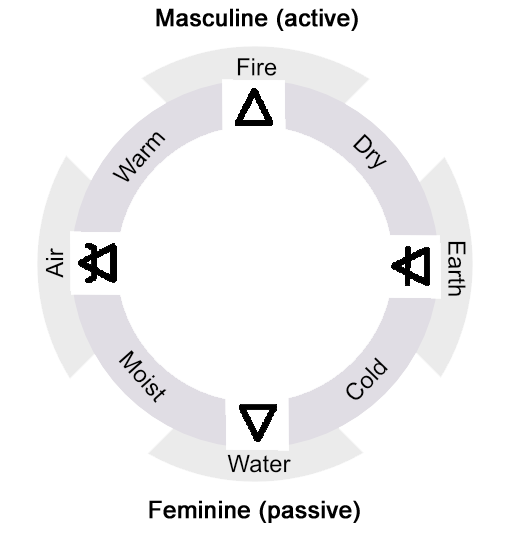 It was established that the Universe was made up of 4 Elements. Each one being unique. These 4 Elements were defined as:

These Elements have been given symbols to represent them:

These symbols have been used for many centuries.
Their importance, nature and influence have been defined over time. Their qualities are well written about and their  importance is used extensively in extended ‘readings.’
For instance ‘Fire’ is regarded as the most powerful and important element. Fire is in the creation of all things, in our case the Sun on which our Solar System is dependent. It is in Fire that all things begin and end.

The four elements are Simple, Eternal and Unalterable

They can combine and usually do. Earth can dissolve in Water, Water can turn to steam and be dissolved by Air. Fire can reside in Earth; strike a rock with iron and the spark of Fire is released.

Ultimately the four Elements return to their pure state. They cannot be sub-divided any further.

The lifecycle of these ‘mixtures’ is complex and varied. To take our steam example this state is not fixed or stable, ultimately the steam will return to water, as rain or condensation.  How long the two Elements remain in each others company could be anything from milliseconds to years.

So it is in humans and the complex life cycle of the Universe.

We are mostly Water also Earth (chemicals), we need Air to live and Fire for heat, both internally and externally.  Our lives and behaviour are controlled by these four Elements; their combination, ebb and flow.
To be denied any of them would certainly be fatal.
We need all four, that is clear.

When we start to look closely at the Elements we see that some are more friendly to each other than others. They often ‘team up’ you can say. Air and Water are most often found together, they are a natural ‘team’ Fire often joins them but then Fire joins with all the Elements. Earth ’teams’ with Water quite happily.

Then there is Fire, the leader, it will combine with any of the other three and also gives us light.
Fire is the most powerful Element clearly.
When we look closely at the Elements we can observe their closeness to some Elements and their ‘opposition’ to others. Air and Earth are opposites, they have little in common.

We will look closer at these relationships:

Let’s start with Fire. It is active and powerful, invisibly present in all things. Boundless, a mischievous part of the nature of things. It will not be affronted or opposed, it will take its revenge in an instant, bringing all things to its obedience. It drives away spirits of darkness, brings light, new life as well as death.

In contrast Water is passive. In its abundance, believed to be (by some) the first element to be created. From it all life is born. Without it nothing can survive. Nor in it does nature have great wanting to work wonderful things in it. It is the seminary virtue of all things, especially animals.

Air, is active; a vital spirit that passes through all beings. Giving life and subsistence to all things. It is the element of the wind, the carrier of cloud and rain, sound and flight. The carrier of speech and to some it is the carrier of dreams.

The basis of all is Earth, the major element and passive. From Earth all thing sprout. Said to be animal, vegetable and mineral, it is all things and the receiver of celestial energies. From it all things grow and do return. It is the centre and mother of all things. It is our rock, our basis for all.

The influence of the elements

It can be seen, from the significance of the elements that they play a part, not only in our existence but also in our spirit, psyche and emotions. They play both a physical and conscious role. The effect of the elements also control our function and subconscious. Their influence is central to us both biologically and spiritually.