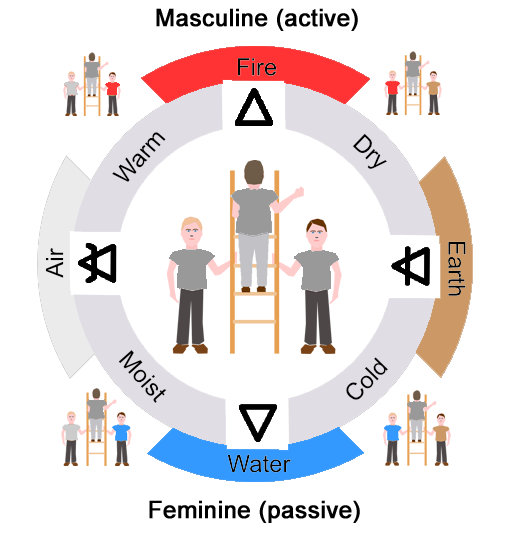 Throughout this introduction we will use this simple illustration.

Here we have someone doing a task. The person on the ladder is you. To do your task you need the support of the two holding the ladder. If they have no ‘influences’  they are supportive and helpful.
Also if you have no ‘influences’ you can concentrate on your task. In this illustration all three are without influence and all is well.

In later illustrations we will denote the Elemental ‘influence’ of each of the three by changing the colour of their shirts. In addition each will have the Element that is influencing them written below their feet for clarity, Earth=E, Fire=F, Water=W and Air=A.

Looking at the Elements with Elemental Dignities

You can see from this diagram the ‘influences’ or ‘Elemental Dignities’ represented by the four ‘ladder’ groups between the elements.
At this point we can start to look at the significance an Element and it’s associated influences have. In our diagram the Elemental Dignities are represented by the two supporting figures. The person on the ladder is you. The two supporting figures represent the Elemental Dignities that support you. We call this a Triad. For those of you who use Tykhe orTarot, this term will be familiar.
In our simple diagram we will assume that you are neutral and therefore will appear dark grey in the following examples. This would not be the case of course but to help keep it simple we will use this method to explain the basics.

On the left the Elemental Dignities are Fire (red) and on the right Water (blue).
In this example your influence would be described as:

The (N) denotes that these two influences cancel each other out, the effect is Neutral (N)

Look again at the Looking at the Elements with Elemental Dignities diagram above, note how the four triads are shown.

Here is a simple list of Triads using the combinations that can occur and a brief interpretation of their meaning. Remember (N) means they cancel each other out.

Does this all make sense?
Hopefully it does!
This has been a introduction to Elements and Elemental Dignities. There are many more things to learn but…this is how it begins. Tykhe Dice readings can use Elemental Dignities when you cast on the Tykhe Board. You don’t have to…but you can. Also Planets and the Zodiac are there too.
If you have any questions or found this useful please ask/join the FaceBook group:  Divination with Tykhe Dice.
HM & Nog, 2018